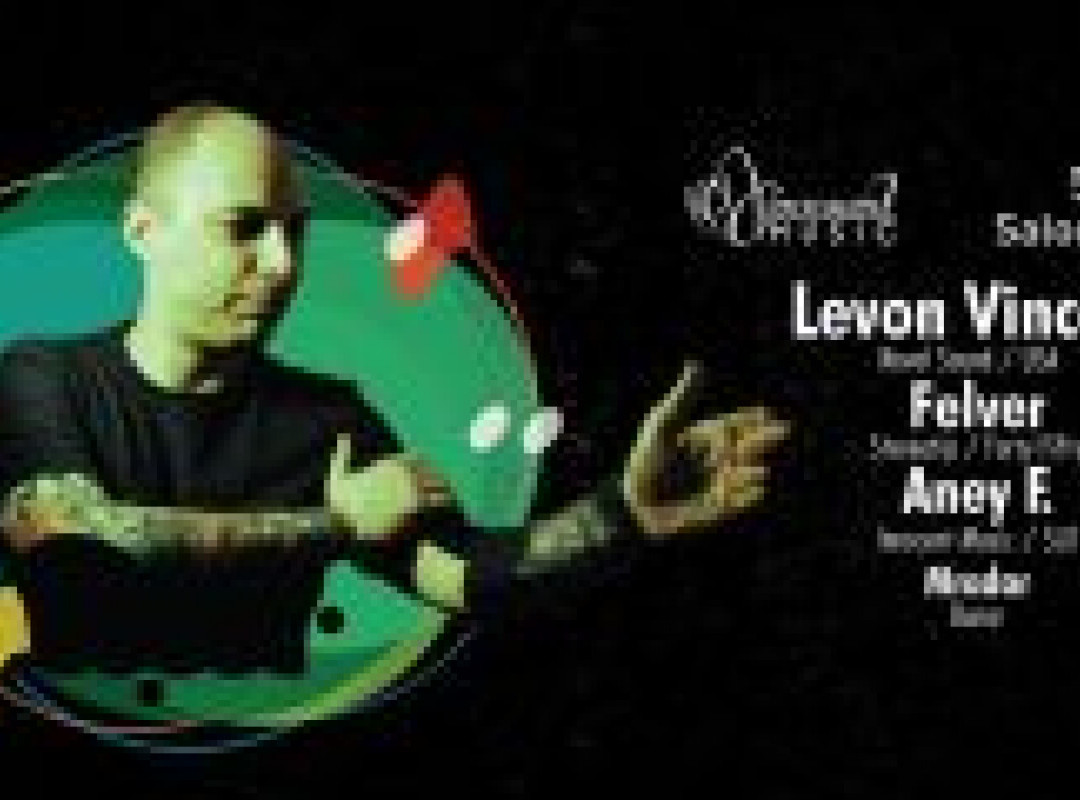 FREE ENTRY with Go N Party XYZ membership!
Not a member yet? SIGN UP NOW > https://gonparty.xyz

LEVON VINCENT ⤵️
When it comes to house music there’s been something of a renaissance in New York City this past decade and one of its main advocates is Levon Vincent. As a club- goer, he cut his teeth during the pre-Giuliani New York heyday, where a vibrant scene was helping to push the elegant sound that would become known as NY house forward – and Levon witnessed it all first-hand. Working his way up through landmarks like Sugar Reef (of Sugar Babies fame) or Pat Field’s Boutique, and record stores such as Kim’s, Tower, and Music Exchange, Levon joined a long, proud lineage of fringe arts based around New York’s downtown culture. Ten years later, in 2001, he began to work at the legendary Halcyon record shop in Brooklyn. Halcyon, which doubled as a café, was more than just a record store – it was a place where music aficionados could sit and exchange ideas while listening to the music they love. With a meaty sound-system and their friendly and open policy, the shop soon became a hub for NY’s most passionate dance enthusiasts.

By 2008, Levon began his own label, Novel Sound. He started with a bang: a certified hit in the form of the label’s first release, ‘These Games’ EP. It’s a 4-track EP and the release featured a song by Jus-Ed as well. Levon repaid the swap on Ed’s own label Underground Quality, with one of 2009’s biggest tracks, ‘Games Dub’. With his industrial clanging beats, Levon’s dubbed-out sound quickly found him supporters from scene veterans like Craig Richards and Berghain’s Marcel Dettmann. Soon after, Levon was invited to play at Fabric, Rex, Berghain, and of course the infamous Underground Quality party series at the now defunct Tape Club. As a producer, his immense focus and concentration come to a head in tracks that have attained anthemic status – the Ostgut Ton release ‘Late Night Jam’, with its driving chord-stabs, sits as comfortably in a percussive UK bass set as it does in any pumping techno set – as demonstrated by Pearson Sound 2011's massive FABRICLIVE 56.

The following years were marked by extensive touring throughout Europe and the World, with successful gigs at reknown clubs and festivals alike. Next to the continuous releases of EPs via his imprint Novel Sound, Levon released his first self-titled album in 2015 to great critical acclaim. His second album 'For Paris' followed in 2017.

“In the 80s, I had some VCRs, a record player and a dual cassette deck. I had a group of friends at that time and we were really interested in DJing and making beats, we would combine various songs and recordings to make new songs and then combine those to make new mixes; stuff like, recording a spoken word track playing over Mr. Fingers or add movie dialogue to another record. We loved the dirty version of I’ll House You, ‘I’ll Hump You’. I remember us all agreeing on that record. Soul II Soul had a big impact, too. I regularly slipup and refer to podcasts as “mix tapes”, maybe because it’s nostalgic or something. It still sounds right to me. Mix tapes are one of the very coolest things to come from GenerationX. After hearing or maybe reading about how Nitzer Ebb were doing their music I remember asking my mom to bring me to the Sam Ash store on 48th to get a sampler, not knowing the price of the things! Upwards of $10k! A few years later I did eventually get a used Ensoniq EPS-1, which was a more affordable semi-pro sampler. I think it was a popular piece of equipment, it was certainly a step up from my Casio SK-1… Many producers probably remember using the EPS-1 fondly.”

INNOCENT MUSIC ⤵️
Innocent Music is a record label and event management company based in Ljubljana, Slovenia, founded in 2012 by Aney F. with a couple of friends that shared a common vision - to establish a platform for young and talented deejays from all around the world who create quality music in the circle of deep and tech house genre.

Striving to unearth some of Europe's best young, unknown talents, we released a plethora of music over the last years that was picked up by some of the biggest names in house and techno scene, eg. Marco Carola, Richie Hawtin, Paco Osuna, Joseph Capriati, Matthias Tanzmann, Guy Gerber, Jamie Jones, Seth Troxler to mention a few. Beatport also selected us as one of the ten labels to watch in 2015.

We organize our own dance events with world-known DJ's and producers.. Our goal was always to create a place of quality entertainment and relaxation for adults of all ages. Since May 2012 we organized more than 70 events that took place in various venues,; from the best clubs in Slovenia like Ambasada Gavioli and Klub K4 to the abandoned warehouses and open air places. In the summer of 2013 we also had couple of showcases in Sankeys Club Ibiza. Our events took place all over Europe, North, South and Central America, Australia and we hosted already Apollonia, tINI, Martin Buttrich, Davide Squillace, Enzo Siragusa, East end Dubs, Livio and Roby, Guti, Steve Bug, Anja Schneider, Tiefschwarz, Shlomi Aber, Nastia, Hector, Nastia, Frivolous, Audiojack, Christian Burkhardt, Mendo, Silicone Soul, Mihai Popoviciu, Seb Zito, Re-UP, Terry Francis, Eddie Richards and many more.

Message: rewind() expects parameter 1 to be resource, boolean given