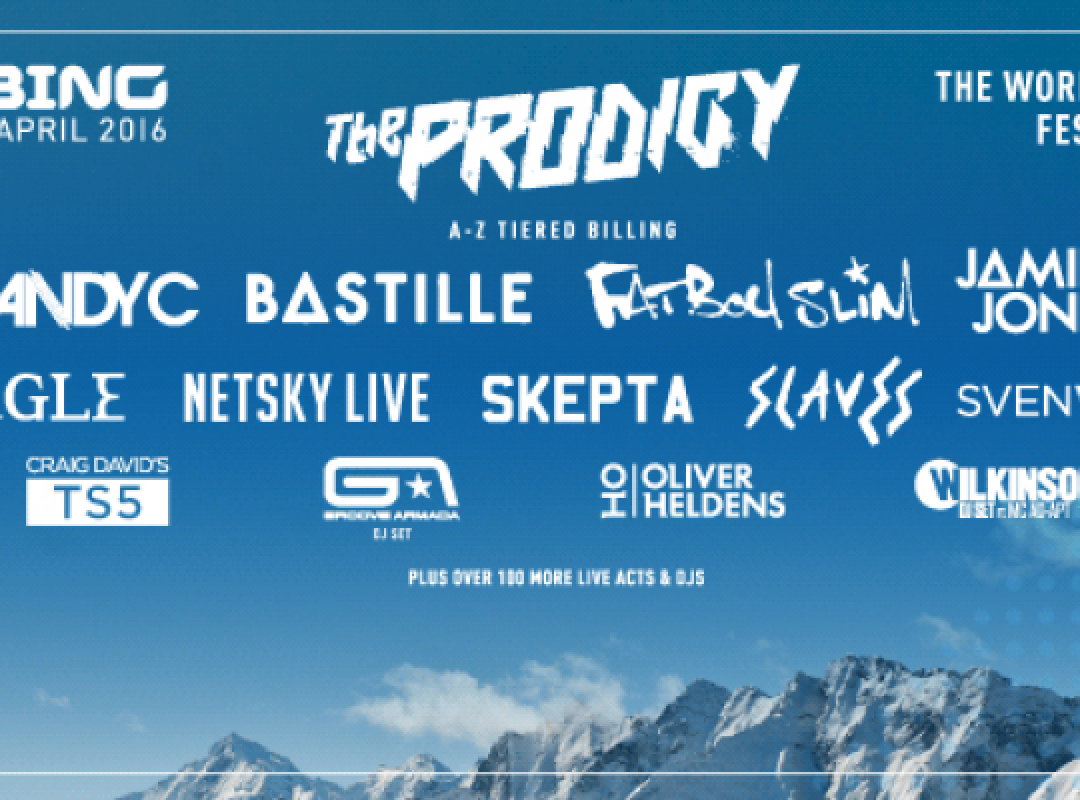 Snowbombing adds another avalanche of acts to the already jam-packed bill, including Fatboy Slim, Sven Väth, Skepta, Slaves, Black Coffee, Sam Feldt, Mind Against and more! The new acts will join headliners including The Prodigy, Bastille, Jungle, Netsky, Andy C and Jamie Jones at the world’s No.1 music festival on snow, which takes place from 4th – 9th April 2016, in the picturesque alpine town of Mayrhofen in Austria.

Fatboy Slim will return to the mountains for a headline set at Snowbombing 2016! Brighton’s favourite beatmaster took control of The Racket Club at SB15 to serve out one of the best sets of the festival. Brimming with hits like Right Here Right Now and Praise You, it also demonstrated the superstar DJ’s return to form with 2014’s chart-topping Eat Sleep Rave Repeat and his killer remix of Mark Ronson's Uptown Funk. With his new project Smile High Club, headline festival sets around the world and even a surprise DJ set at Banksy’s Dismaland, it’s been a phenomenal year for the big beat pioneer and his performance at Snowbombing 2016 is guaranteed to be another show-stopper.

Next up, and swapping the White Isle of Ibiza for the white peaks of the ‘Hof for his debut Snowbombing performance, it’s Sven Väth! Few artists have built a legacy as far-reaching and influential as techno luminary Väth. One of dance music's most colourful characters, his legendary Cocoon parties at Amnesia continue to be a mecca for partygoers all around the world. With his outlandish on-stage antics and boundless enthusiasm, Papa Sven’s snowbombing debut is sure to be unmissable.

Snowbombing 2016 also welcomes Skepta! Since his 2007 debut album, Greatest Hits, MC and producer Joseph Junior Adenuga, AKA Skepta, has continued to lead the charge for the London grime scene. Throw-back anthem “That’s Not Me” propelled him back into the limelight last year, closely followed by Shutdown, which won best song at the 2015 MOBO Awards. And when it comes to live shows, there’s no-one more commanding on the mic. From the moment he steps on stage at SB16, Skeppy’s uncompromising sound and lyrical energy are guaranteed to get the entire crowd jumping.

Another act making their fist appearance on the Mayrhofen mountains are BBC’s Sound Of 2015 nominees Slaves. The punk duo from Kent never fail to attract a swarming moshpit, with their pop-rock choruses, memorable guitar riffs and rapid-fire vocals, on knockout tracks like White Knuckle Ride, The Hunter and Live Like an Animal.

When it comes to house music, South African DJ Black Coffee’s soul-drenched house vibes will be the perfect pick me up after a day on the slopes, along with sets from Citizenn, Dirtybird’s Justin Martin, Spinnin Records' Sam Feldt and Dutch duo Chocolate Puma. Also announced today are acts including Chris Lorenzo, Doorly, Droog, Mele, Mind Against, Shy FX’s Party on the Moon and everybody’s favourite mischief makers The Cuban Brothers. With more names added and lots still to be announced Snowbombing 2016 is shaping up to be the most incredible year yet.

Nestled in a breath-taking alpine setting with snow-capped vistas, Snowbombing boasts the most awe-inspiring festival venues in the world; from a mountaintop igloo 6,000 feet above sea level, to enchanted forest clearings, cosy alpine lodges, atmospheric medieval barns, and an impressive selection of après ski bars and clubs.

So if dancing against an unparalleled panoramic backdrop that other festivals could only dream of, partying with the world’s most groundbreaking live acts and DJs, relaxing in a luxury spa or just riding the fresh white powder appeals, then join us in Mayrhofen for SB16! Packages start from just £299 (+bf) for 5 nights' accommodation and festival wristband. Book your place by visiting www.snowbombing.com.